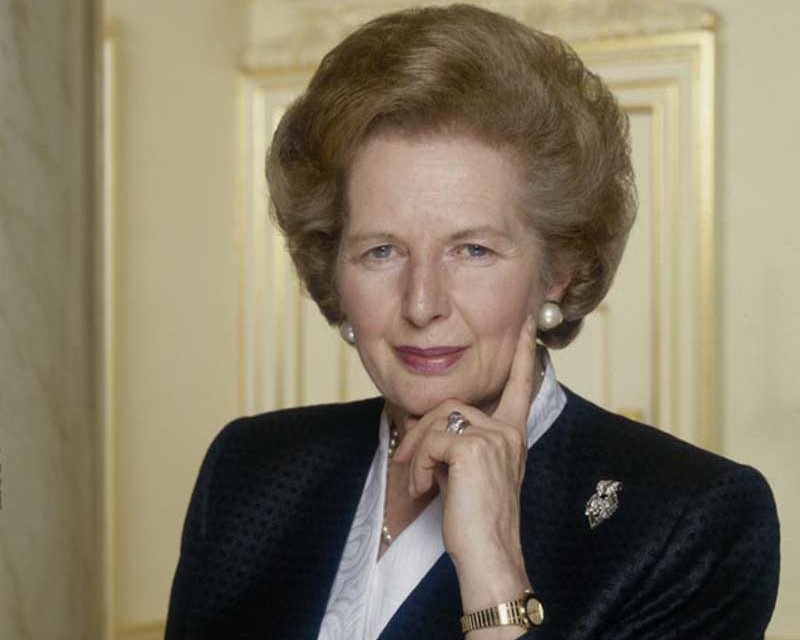 We may scorn the millions of Americans who voted Trump to power, but we have major blots on our own record:

Thatcher, arrogant,  feared by her ministers, dogmatic implementer of neoliberal economic policies, including  tax cuts for the richest, cuts in social services spending, undermining of trade unions,  de-regulation of the banks and  big business, privatisation of public utilities and nationalised industries, liar, despiser of the poor and a war criminal (as evidenced by her conduct of the Falklands War).

Blair, arrogant, power-hungry, eager lap-dog of George Bush, liar, war Criminal  (as made clear by the Chilcot Report) and since his departure from Parliament, money-grubbing “adviser” to any corrupt dictator prepared to pay him enough.

(Note to all media organisations. Do not give air-time or a single column millimetre to Blair. He is totally discredited. Leave him in his box and let’s hope somebody comes along to drive a stake through his heart. He will, of course, remain a self-publicist, always seeking opportunity to pronounce his views as if he were the fount of all wisdom, with the whole world waiting to hear from him.

Following her election to Prime Minister in 1979, just like her friend, Pinochet in Chile, Thatcher  ruthlessly implemented the neoliberal economics of the Chicago Business School.  Social services were cut to the bone, major industries were de-gutted, manufacturing moved abroad to wherever labour was cheapest and mass unemployment devastated great swathes of the country. Within her own party, the one-nation Tories were afraid for their seats, but the Lady was “not for turning”. Her economic policies were continued by Blair and Brown to the everlasting shame of the Labour Party

It was on the cards that the unpopularity she had earned would lose her the 1983 General Election.

The 1982 Falklands War saved her bacon. The body-count of that unnecessary war was meaningless to her.  The manner in which she was sycophantically feted by Blair and Gordon Brown, when Labour was in power, was sickening. Like her, they have severely distorted personalities.

During 1981, the one-nation Tories, all labelled “wets” by Thatcher, were in retreat, but consoling themselves with the thought that, being such a disaster, she was heading for certain  defeat and inevitable oblivion at the next General Election.

Her potential nemesis, General Leopoldo Galtieri, was part of the military junta which took over Argentina in 1976. He was a leader of the fascist junta which took power in 1976 and began the infamous “dirty war”. Congress was suspended. Trade unions and all political parties were banned. Between 9,000 and 30,000 people deemed to be left-wing were “disappeared”, arrested, tortured and murdered, often by being thrown from aircraft over the South Atlantic. US president Reagan recognised that Galtieri was a bastard, but he was “our bastard” and therefore a valued ally. Galtieri supported the CIA in their backing of the Contras in Nicaragua, arming them with money made by sanctions-busting trade with Iran. He became President as well as military commander in chief in a coup in 1981

The Junta’s zealous pursuit of neoliberal economic policies led to considerable social unrest in Argentina, including 130% inflation. Like Thatcher, Galtieri was fearful of being displaced and so he searched for a cause which might popularise him.  Like Thatcher, he saw that war might yield salvation and that the taking of the Malvinas from Britain would rally the nation and offer him the ticket to life-long Presidency.

The Malvinas, or Falkland Islands are 300 miles east of Argentina and 8,000 miles south of Britain.  The islands were uninhabited until 1764. Argentina’s claim to the islands is that they were a Spanish possession and so they were transferred to Argentina when it became independent of Spain.  Britain’s claim dates from 1833, when it grabbed  the islands, expelling all Argentinians and others living there, adding the Falklands to the British Empire’s  long list of colonies.

The islands have long been the subject of contention between Argentina and Britain.

During 1981 there were rumblings in Argentina about taking the Malvinas, if necessary, by force.

Reports to this effect from the security services were ignored by Thatcher. In her arrogance, she found it hard to take advice from anybody. It was  reported to Downing Street that there was a military build-up in Argentina and a grave risk that this was preparatory to invading the Falklands, but all Thatcher did was withdraw Britain’s one naval vessel in the South Atlantic, in order to save money.  Argentina read this as an indication that Britain had no intention to defend the Falklands.

During March, 1982, GCHQ intercepts repeatedly reported indications that Argentina was preparing to invade the Falklands. As usual, Thatcher knew best. Conflict was avoidable, but she saw that her position could be secured by engaging the country in an easily winnable little war.

20th  March 1982, the Argentine flag was raised on South Georgia, a British possession 800 miles south of the Falklands. The Argentine cover story was that a party of scrap merchants had landed in order to dismantle for scrap the long-abandoned whaling station on the island. The UK made no comment and certainly took no diplomatic or military action.

2nd April 1982, an argentine amphibious force landed near Port Stanley, the Falklands capital. The Argentine flag was raised, the British Governor was deposed and the contingent of Royal Marines stationed there as a token force was overwhelmed, surrendered and they were taken prisoner. The Argentine troops obeyed the order not to harm any British people, despite sustaining casualties themselves.  There was soon an occupation army of 10,000, mainly poorly trained conscripts, who were unsuitably clothed for the Falklands climate and badly equipped.

4th April 1982, in a rare Saturday sitting, the Commons ratified the Cabinet’s decision to send a Task Force of over 100 ships to the Falklands. Thatcher did not  tell MPs about the intelligence she had been receiving for months about an imminent threat to the Falklands. She did report that there were continuing diplomatic efforts to resolve the problem and bring an end to hostilities. That was a lie. There had been no serious diplomatic efforts up to that point.

The British media whipped up a storm of war frenzy reminiscent of the jingoism of 1914.

5th April 1982, the Task Force left Portsmouth with a send-off by thousands cheering and waving the Union Jack. (I wonder what proportion of that crowd could find the Falklands on a map and knew on what basis Britain claimed possession.)

In Argentina, too, the public was eager for war.

1st May1982, RAF and naval planes bombed the occupying forces and their main air-strip. By now the Junta realised they had bitten off more than they could chew and accepted the Peruvian President, Belaunde as a broker in pursuing a settlement.  On that day, in a telephone conversation with Belaunde, Galtieri confirmed that all Argentinian ships had been ordered to return to port, without engaging in any hostilities.

That Argentina was now seeking a peace deal was known to the USA and to Downing Street.

2nd May 1982, at a press conference in Lima, President Belaunde announced that he had a document which could lead to the immediate ending of hostilities. It represented neither surrender, nor unilateral backing down for either side. Its contents had been notified to Washington, where the British Foreign Secretary, Francis Pym was then in a meeting with the US Secretary of State. The document’s first paragraph committed both sides to “immediate cessation of hostilities”.  Clearly, Argentina was, in effect, suing for peace.  That same day, having first been ordered, on 1st May, not to attack any Argentinian craft, the British nuclear submarine, HMS Conqueror, was now ordered immediately to attack the Argentinian cruiser Belgrano, although it was outside the 200-mile total exclusion zone declared by Britain and not sailing towards the Falklands and British shipping. Three torpedoes were fired and the Belgrano quickly sank. Of the 1,100 crew on the Belgrano, 330 died. The Sun newspaper surpassed itself for war-mongering bloodlust by appearing with a front page bearing nothing but the banner headline, GOTCHA.

This unwarranted attack, ordered by Thatcher, was arguably a war crime.  That Galtieri would feel justified in retaliating was obvious. Indeed, the people of Argentina would demand it.

4th May 1982, HMS Sheffield was attacked from the air, being hit by Exocet missiles, leaving 20 crew dead and 26 injured. The ship eventually sank.

Despite the Argentinian and British losses of 2nd and 4th May, Peru continued to seek a diplomatic solution, which would have to include a ceasefire, eventual withdrawal of the Argentinian forces and their replacement by a peace-keeping force perhaps composed of German and Brazilian representatives, some kind of face-saving formula for Galtieri and the possibility of Thatcher being able to claim victory.

21st May 1982, Britain’s first major landing, at San Carlos Bay, 65 miles from Stanley. British ships in the Bay were attacked by Argentinian planes. HMS Antelope and HMS Coventry were sunk. The container ship, Atlantic Conveyor, was hit with Exocets. In these attacks several personnel were killed or injured and military assets were destroyed.

29th May 1982, British paratroopers overcame an Argentinian force at Goose Green, which outnumbered them three to one. The British losses were 18 dead and 60 wounded.

In the last three days of vicious fighting, 46 British soldiers were killed and 158 wounded. HMS Glamorgan was struck by an Exocet, with the loss of 13 crew killed and many more wounded. The most decisive battles were at mount Langdon, Mount Tumbledown, Two Sisters and Wireless Ridge. These remote locations, previously unknown to the British public, became familiar due to the daily reports, given each evening on BBC television by Ian McDonald, the MoD spokesman. His lugubrious, strictly factual accounts, made him a celebrity.     The loss of Atlantic Conveyor, its supplies and logistic support left the British forces, cold, wet and hungry. They suffered from loss of sleep and dysentery, but Thatcher slept her usual few hours, tucked up at Downing Street and Galtieri was similarly comfortable at the Casa Rosada in Buenos Aires.

There was a victory parade in London and Thatcher graciously accepted the thanks of a grateful nation, displacing the Queen as the conquering hero. She won the 1983 General Election. Objective achieved.

The total cost in blood of this unnecessary war was 258 British service personnel killed and 775 wounded. The cost in Argentinian blood was 649 killed and 1,657 wounded.

Thirty six years later, the number of veterans on both sides still suffering PTSD is not known. Neither is the number of suicides.

Thatcher and  Robert Runcie, Archbishop of Canterbury are known to have fallen out when, at the Falklands Memorial Service, he prayed for the Argentinian dead, as well as the British.

Galtieri was removed from office a few days after the surrender. In 1983 he was arrested and charged with human rights violations and mismanagement of the war. He was sentenced to 12 years imprisonment, approximately one year per 170 murdered. Still the fate of each of the “disappeared” has not been revealed.

Margaret Thatcher was deposed by her own party in 1990, a few days after a blistering attack on her in a resignation speech by her longest-serving minister, Geoffrey Howe. She died in bed at the Ritz Hotel in 2013, at the age of 87.

In 1997, Blair came to office and embarked on his Iraq war in 2003, the cost of which in blood and money continues to rise.

Netanyahu at it again