Continuity and biodiversity on Chislehurst Commons 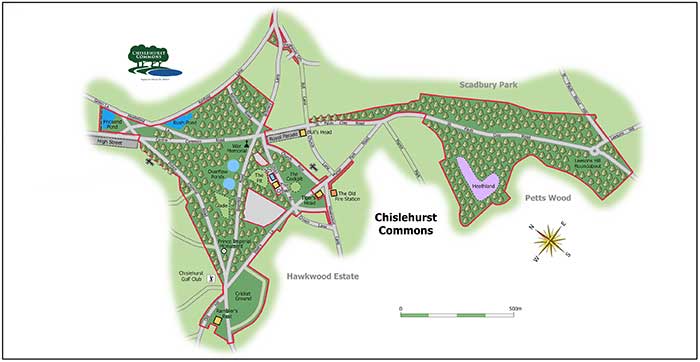 Chislehurst Commons are fragmented into eleven islands by intersecting roads, which all originated in country lanes, rough tracks or mere footpaths.  Over time, previous Lords of the Manor have sold or given away ground so that successive local authorities, starting with Chislehurst Urban District Council, could create or widen routes, culminating in the present state, with major roads ─ the A208, A222, Prince Imperial Road (known by its familiars as Brands Hatch) and several lesser rat-runs splitting up the Commons into isolated bits and pieces. The A20 dual carriageway ─ virtually a full-blown motorway ─ completely cuts off Sidcup Green, unloved and litter-strewn ─ from the rest of the Commons. (Some of us have not forgotten that Sidcup Green was once part of Chislehurst Common and was ceded to Bexley Council in 1965.

An aim of all lovers of the Commons should be to combat the petrol-heads by seeing some of the roads closed; yes, permanently closed, dug up and the ground returned to the commons.

Surely, the more open space and greenery we have, the better. More common and less asphalt would be a good thing in itself.

If you want to see hedgehogs making a come-back, shut some of their killing-fields. The same goes for lizards, frogs, toads and newts. Most animals have no road-sense whatsoever.  Why should they? They were resident here long before we turned up with our lethal motor vehicles.

Wildlife and its diversity need continuity, both in time and space. It takes time, uninterrupted time, for a community of plants and animals to become established. A community needs a sufficient size of habitat to develop and maintain a good range of species’ age and diversity.

Birds and flying insects can overcome the problem of obstructing roads and so can all the plants which reproduce by means of fruits and seeds. Plants which spread vegetatively, have a problem when their rhizomes or suckers meet concrete or asphalt. The same goes for fungal mycelia.

In some contexts, separated areas can be joined by wildlife corridors, meaning strips of the same type of vegetation, which become colonised by plants and animals from the ‘island’ habitats and, in the course of time, allow for migration of species through the corridor.  But one cannot have a wildlife corridor across a road. It is not unknown to have a wildlife tunnel, or bridge, but they are expensive propositions.

When ‘island’ habitats remain isolated for an extended period, there is the risk that a species in one or more ‘islands’ may become extinct and there is greatly reduced possibility of genetic interchange. Of course, the smaller an ‘island’ is, the greater is the risk of loss of biodiversity.

Easing traffic hold-ups is not so much a concession to the ever-increasing numbers of vehicles, rather a means of reducing the eyesore and pollution of standing traffic. Creating new bus pull-ins on Royal Parade and Bromley Lane would considerably ease the problem of traffic blocked behind a bus backing up across the War Memorial junction into Bromley Road and into Centre Common Road.  Such small losses to the Common could be more than compensated by, for example, closing that section of Kemnal Road, which is between Ashfield Lane and Bromley Lane. The loss of that bit of Kemnal Road would not be a world-shattering tragedy.  It has a limited volume of through traffic. It is little more than a car park and dumping ground for feckless drivers’ rubbish. Its closure and return to the Common is a move proposed by Bromley Council some 20 years ago and never realised.

Rather more radical would be altering the entry from Bromley Road into Old Hill and, elsewhere, creating a roundabout at the Ashfield Lane/ Bromley Lane junction. In compensation for the entailed loss of bits of the Common, what about closing that section of Heathfield Lane between its junction with Centre Common Road (a lethal crossing for pedestrians) and the Loop Road mini-roundabout?

Will anything ever come of this? The main decision makers are the trustees of the Commons, the Chislehurst Society, Bromley Council and Transport for London.

The Common cannot be kept in aspic for all time. Every opportunity should be taken to gain common land and to improve biodiversity.